FitBiomics is developing specialized strains of gut microbes identified at the Wyss Institute into probiotics that can improve human health and function.

There is no question that elite athletes’ bodies perform at a level above and beyond what most typical human bodies can achieve. But while very few of us will ever compete in the Olympics, many of us are interested in helping our bodies function at our own personal best. What is it about athletes that give them almost super-human abilities, and how can we use information about their biology to improve the performance of all humans?

Research at the Wyss Institute identified unique communities of microbes in the guts of elite athletes that contribute to enhanced physical performance. These microbes are now being developed into probiotic supplements by FitBiomics, Inc.

Jonathan Scheiman, Ph.D. played Division 1 basketball at St. John’s University and helped the team win the BIG EAST Conference Tournament and the National Invitation Tournament. When dreams of playing in the NBA didn’t pan out, he went to graduate school for molecular biology and secured a postdoc in the lab of Wyss Core Faculty member George Church, Ph.D. at Harvard Medical School.

Inspired by the Wyss Institute’s mission of taking inspiration from nature to make people and the planet healthier, Scheiman combined his passion for athletics with cutting-edge biotechnology into a lab project called “sports genomics.” The goal of the project was to decode why elite athletes are able to perform at such high levels, and translate those learnings into next-generation nutrition that could help optimize human performance not just in sports, but in life.

In 2015, Scheiman and his colleagues started analyzing the microbial residents of athletes’ guts, based on the hunch that such high performance likely depended on the presence or absence of certain bacteria. Fortunately, the Boston Marathon was right around the corner, so the team studied the gut microbiomes of marathon runners after they completed the race and found that a specific group of bacteria, called Veillonella, was enriched.

When the researchers isolated Veillonella bacteria from marathon athletes and gave it to mice, the animals’ performances in laboratory treadmill tests improved by 13% compared to those given control bacteria. They further determined that the performance boost was due to the bacteria’s ability to break down lactate (a metabolite that accumulates with strenuous exercise), and produce propionate (a short-chain fatty acid that enhances the body’s resilience against exercise stress). In 2019, Scheiman and Church co-founded FitBiomics to bring Veillonella and other microbial powerhouses to the masses as a probiotic nutritional supplement.

FitBiomics is now developing a platform of next-generation probiotics for various applications. This includes athlete-derived strain variants of current probiotic species such as Lactobacillus, which serves as the basis for their first commercially available product, Nella. Among the athletes who use Nella are two US 2020 Tokyo Olympic medalists: Adeline Gray won silver in wrestling and Krysta Palmer won bronze in diving. In 2021 Nella was also named the official probiotic of St. John’s University, and in 2022 the San Fransisco Marathon partnered with FitBiomics. 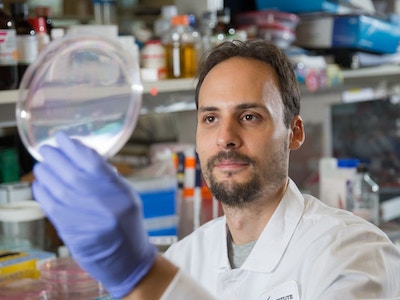 Former D1 Hoopster Searchers for Athletic Boost in the Microbiome