Want to license this technology?

To obtain additional information or to learn more about our intellectual property portfolio or licensing opportunities, please contact us.

As robots have gotten smaller, softer, and more maneuverable, they’ve opened up myriad possibilities for interacting with objects on a tiny scale, including on and in the human body. However, human hands still have a major advantage over robots: the ability to feel.

Researchers at the Wyss Institute are using the Pop-Up MEMS manufacturing technique to create flexible, mesoscale force and position sensors that can be customized for use in medical and other applications. One particular configuration of the sensor consists of four layers of laser-machined stainless steel, sandwiched together and laminated with a flexible polymer layer to facilitate self-assembly and copper to provide electrical contacts. When agitated in an ultrasonic bath, this 2D structure “pops up” into a 3D sensor via an integrated spring. With a footprint of 2.7mm, the sensors are small enough to pass through the working port of an 8.6mm surgical endoscope. 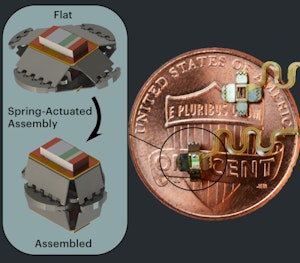 The manufacturing technique can accommodate a variety of sensing modalities, the most recent iteration of which incorporates a Hall-effect-sensing element that monitors the magnetic field produced by a permanent magnet, which is separated from the sensor by an articulating linkage structure. As the linkage structure moves under an actuation force, the magnet moves with respect to the sensor, and the sensor can measure this movement by monitoring the changing magnetic field. The sensor has been tested as an add-on to an endoscope that can give the operator a greater sense of the endoscope’s position inside the patient and interactions with organs and tissues of interest. In addition to laparoscopic surgery, the sensor could be used to allow microrobots in the field to interact more dextrously with their environments, and for optical sensing.

This technology is available for licensing.

Want to license this technology?

To obtain additional information or to learn more about our intellectual property portfolio or licensing opportunities, please contact us.